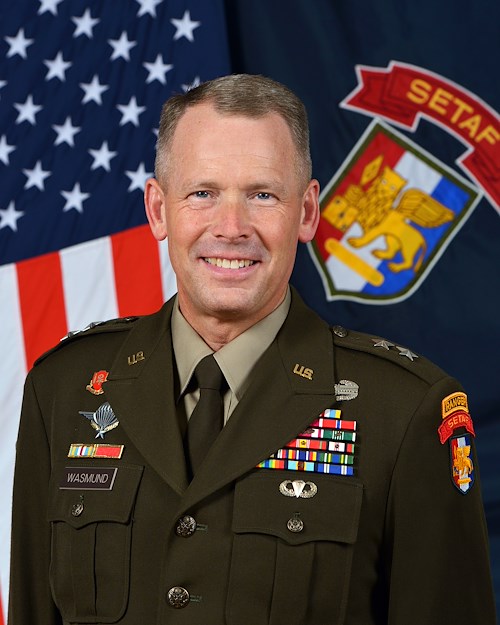 Major General Todd R. Wasmund most recently served as the Deputy Commanding General – Operations of the 3rd (French) Division in Marseille, France. He was the first U.S. General Officer selected as an exchange officer with the French Army.

Commissioned into the Field Artillery in 1991 upon graduation from the United States Military Academy, he has served in a variety of positions throughout the United States, Europe, South Korea and Asia.

He had the privilege to lead Soldiers on a Border Transition Team in Iraq in support of Operation Iraqi Freedom.  He later commanded the 1st Battalion, 17th Field Artillery in the United States and in Afghanistan in support of Operation Enduring Freedom, and he served simultaneously as the Chief of Staff of the Combined Training Advisory Group – Army in support of the NATO Training Mission – Afghanistan.  He later commanded the 3rd Infantry Division Artillery Brigade at Fort Stewart, Georgia.

While serving as Deputy Commanding General (Support) of the 1st Infantry Division, he commanded the Division Headquarters (Forward) in Poland in support of Operation Atlantic Resolve.

MG Wasmund’s staff experience includes Chief of the Joint Staff, J35, Joint Operations Division in support of U.S. Africa Command and Chief of Staff of the Fires Center of Excellence and Fort Sill in Oklahoma.