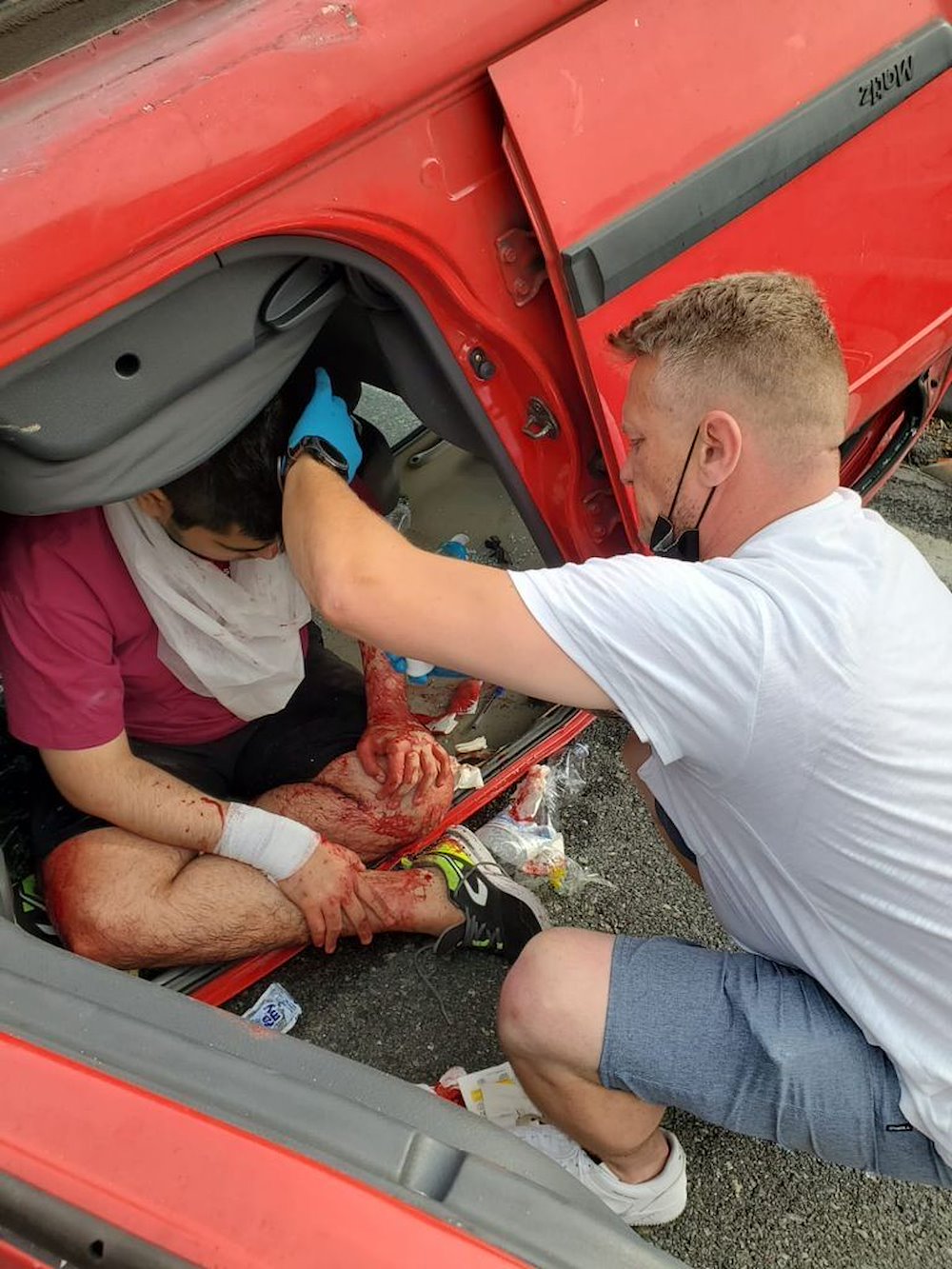 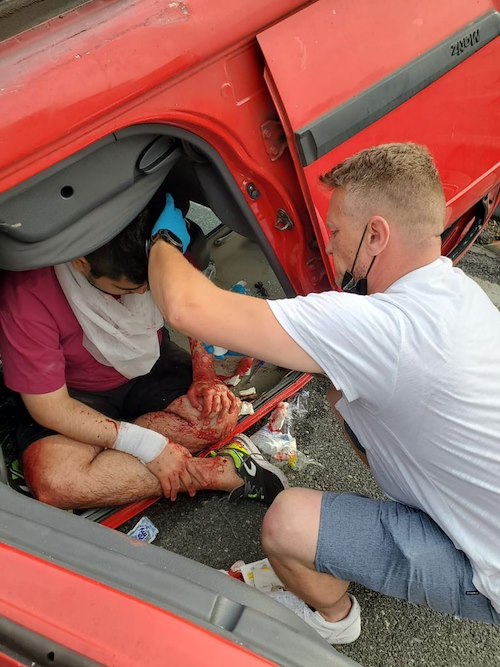 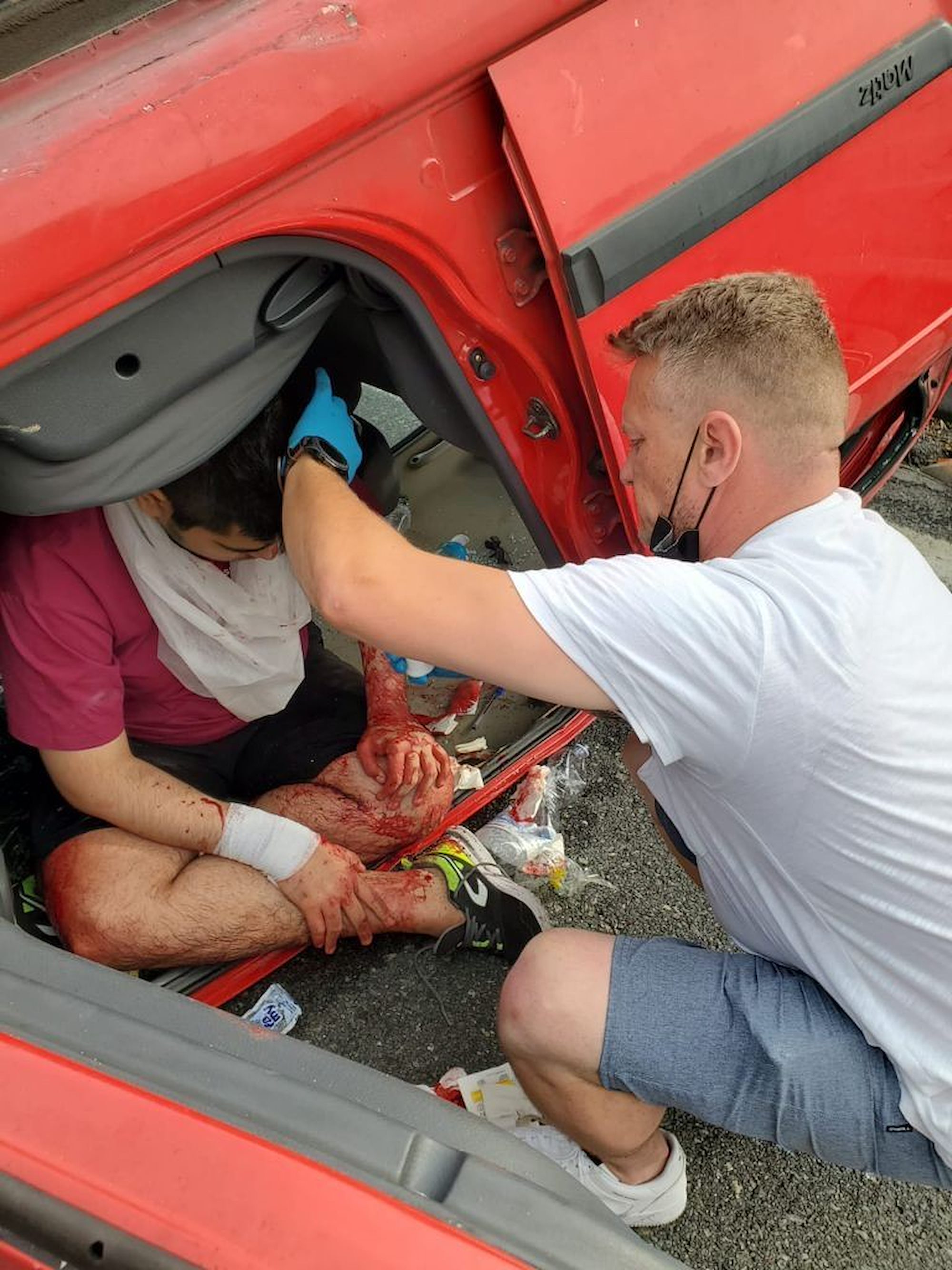 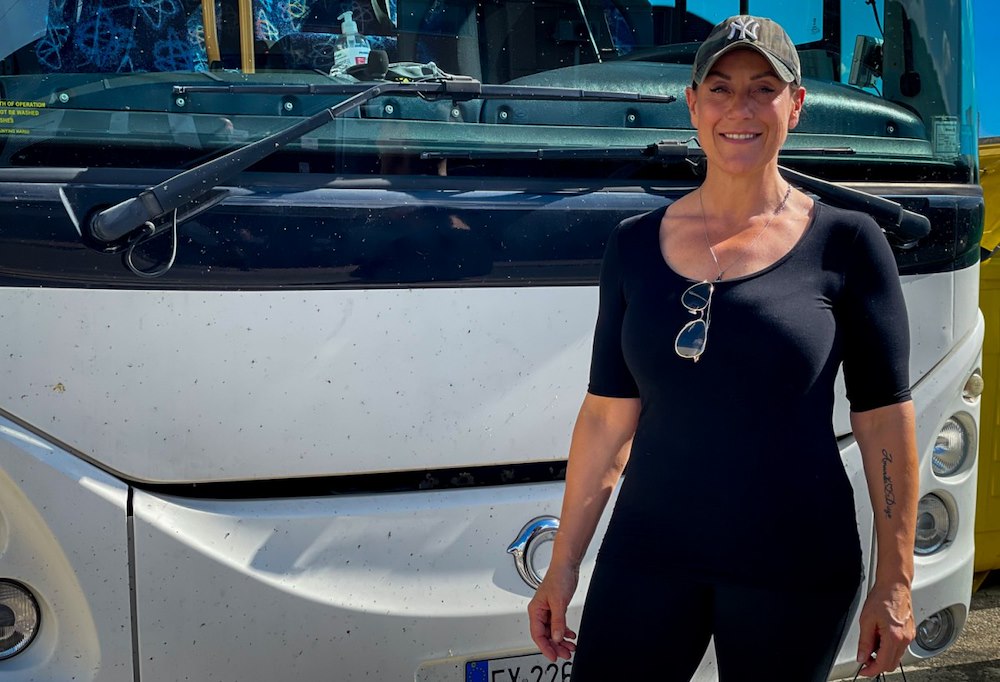 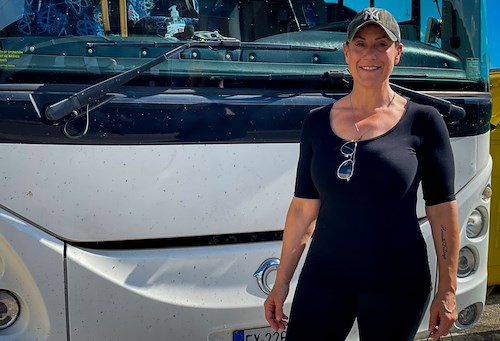 Cristina Lopez stands in front of the USAG Italy Family and Morale, Welfare and Recreation Outdoor Recreation bus that stopped on the Italian autostrada on June 21, 2021. Lopez was escorting a group of American military community members on a day trip to the Aquarium in Genoa when an accident had occurred. Lopez provided assistance to the injured as well as translated at the scene. (U.S. Army photo by Cristina Piosa)
Share:
Download image
Photo by: Cristina Piosa 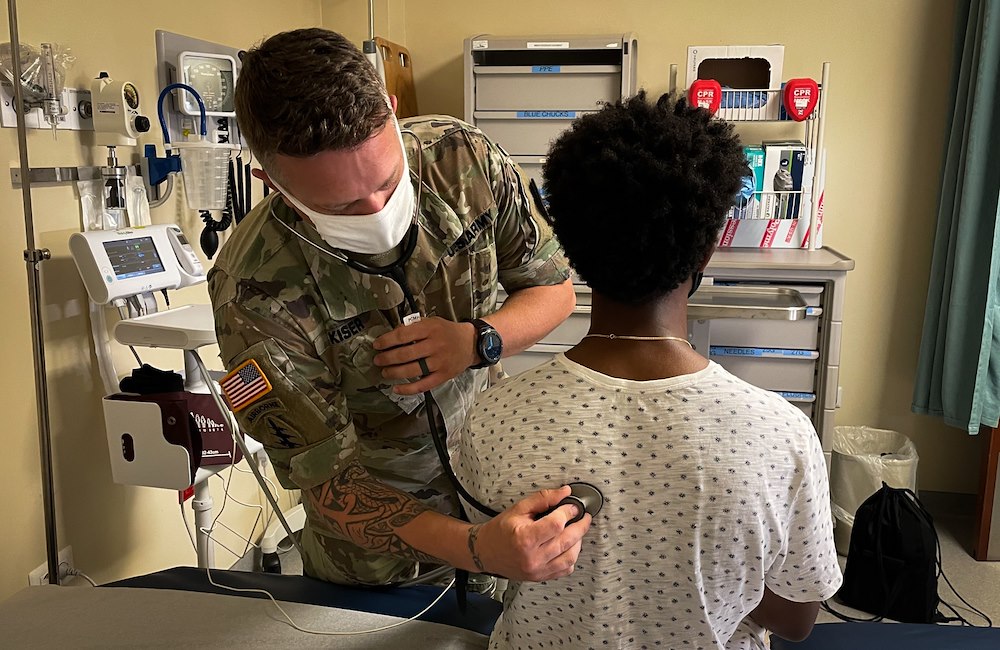 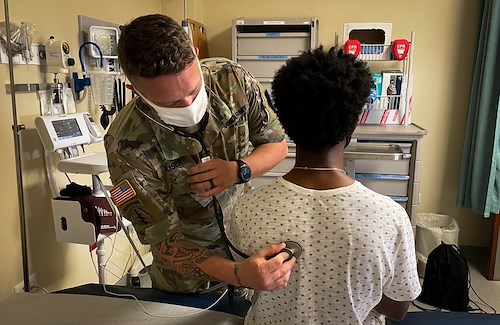 When traffic halted on the autostrada outside Genoa, Cristina Lopez, the spouse of a retired U.S. Army Soldier, knew something was wrong.

Lopez, an escort for a group of Americans returning to Vicenza from a daytrip to Genoa’s aquarium, said their bus was just entering the Italian highway when they stopped.

“There were three or four vehicles in front of us. I knew something had happened,” Lopez said. “A car in front was flipped upside down.”

No ambulance was on the scene. No one left their cars. By all accounts, the accident had just occurred. Lopez, turning back to the passengers, called out for a medic.

The four-hour bus ride back to Caserma Ederle was supposed to be uneventful for Sgt. 1st Class Chantley Kiser, a noncommissioned officer from U.S. Army Health Center – Vicenza. A medical Soldier with 20 years of trauma experience, Kiser heard the call and was ready to respond.

Grabbing a first aid kit from the bus, Kiser and Lopez ran toward the accident. Three people were inside the overturned car. A mother was driving. Her son was in the front seat, and a grandmother was in the back. Reaching in, Kiser turned off the car’s engine.

With help, the mother crawled out. They then helped extract the grandmother, who had “a rapid and thready pulse,” Kiser said. “You could clearly see she had bruising and a good contusion on the back of her head,” adding that she was complaining of chest pain and arm pain.

The young man was worse off, Lopez said. Covered in blood, it was clear he had broken bones and a serious-looking head wound. As Kiser bandaged his broken right arm and leg, Lopez translated.

“I did not extract him,” Kiser said. “He had broken bones and I did not have the right equipment. I didn’t have a [cervical collar], so I was not going to move him around.”

An Italian doctor, also stuck in traffic, came up to help. Kiser summarized the people’s injuries and continued assisting the son as the doctor helped the grandmother.

Paramedics then called for a helicopter to airlift the injured man to a nearby hospital.

Lopez continued to translate for Kiser and calm the mother, who was experiencing shock, Kiser said. As the Italian paramedics and police arrived, Lopez used her language skills to inform them of what happened. The ambulance left with the mother and grandmother.

When Lopez and Kiser returned on the bus the rest of the passengers were cheering and clapping. Wilson put the bus in gear and headed back to Vicenza.

“I was very impressed. It might have been my adrenaline, but I couldn’t believe what had just happened,” Lopez said.

That weekend there were several accidents in the same area, Lopez said. Kiser and Lopez never found out the identity or the conditions of the people they helped. That said, Kiser was glad the group stopped to assist.

Their efforts exemplify the Army values of selfless service and personal courage. But Kiser, a humble NCO, saw this just as his role to assist.

“Everybody can have some part to play,” Kiser said. “There is always somewhere you can help.” 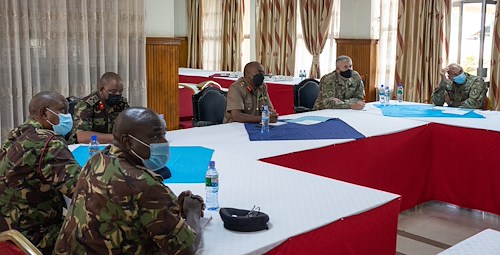 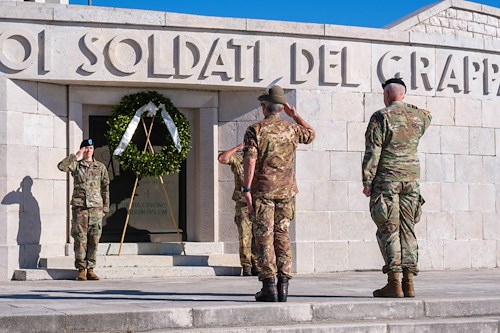